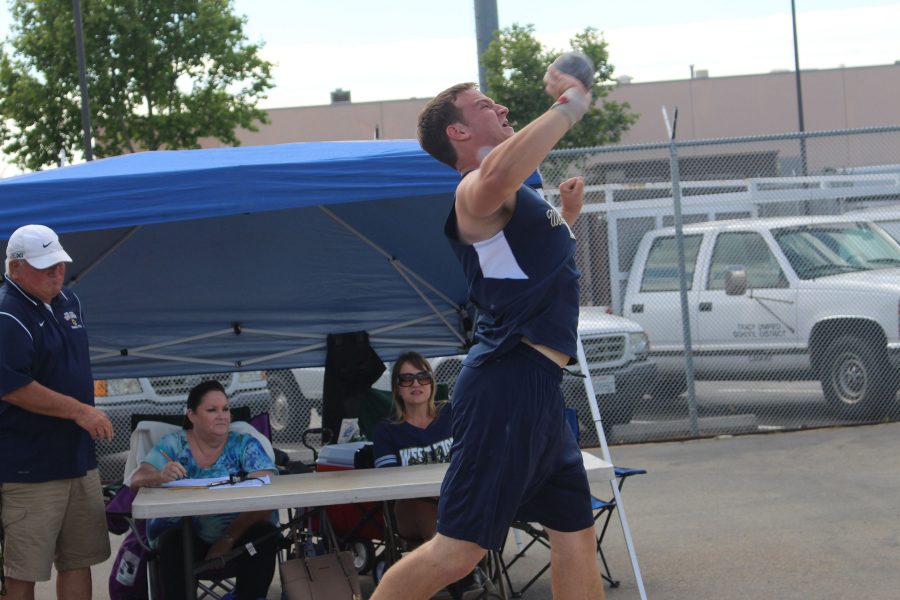 What comes to your mind when you think about track? Running, distance, jumping or hurdling? To many, track is made up of just running, and most do not know about the field events. Events like throwing and pole vaulting might not be as well-known as other running events, but they are also a vital part of the track team here at West. And the seniors in these events have worked very hard these last few years to help the field events do their part for the team and more.

Dangerous, thrilling, exciting and satisfying are just a few words that many athletes use to describe the sport of pole vaulting because it is like no other. Unlike the other sections, they do not battle for points on the track or in a ring but their competition is in the air. To Vanesa Riley, one of the senior pole vaulting captains, her event is different than running events because “it takes a lot of courage to do it and in order to progress you have to be dedicated.” Riley joined pole vaulting her freshman year because “it looked cool” and over the years the sport has changed her “by showing [her] that if you really want to achieve something you really have to work at it and not slack off.” Pole vaulting has impacted her so much. She hopes to continue participating in the sport after high school at San Joaquin Delta College (SJDC). She is leaving her own legacy behind at West as she is the record holder for varsity girl pole vault at 10 feet.

Riley is not the only successful pole vaulter as her co-captain, Isaac Soria, has many achievements in track as well. Soria also started pole vaulting his freshman year. In addition, Soria also does wrestling and sprinting, but he likes pole vaulting more because “there is not as much stress.” Over the years, he has grown to love the sport because when he is high in the air there is a “feeling like no other.” Soria has been very successful in his four years as he as been the TCAL champion in pole vaulting, 300 hurdles, 110 hurdles and the 4 by 4. After high school, he will take the skills he learned with him into the Navy, to continue a “family tradition.” Along with Riley and Soria, Terrell Mos, Jessica Hynuh and Bryce Smith are also seniors who have worked very hard on the pole vaulting team.

“Sector”, “scratch” and “heads up” are common vocabulary most throwers are accustomed to. Senior Emran Kazeem learned all of these words and more his freshman year when he joined the throwing team. He joined because he did the sport in middle school and enjoyed it. Between shot put and discus, he likes shot put more because of “the aggression and violence you can put into it.” His greatest accomplishment was ”beating the school record at Castro Valley both my [his] sophomore and senior year.” And his plans after high school are similar to his teammate senior Jarrett Rasmussen. As captain, Rasmussen has worked hard to perfect his technique since his sophomore year when he became a part of the throwing team. He joined because some of his friends “wanted to do track and when [he] found out there was no running [he] was very excited.” Rasmussen has enjoyed most being a competitor and believes his section is different because “it is more technical and has a lot of being center stage and not running with other people.” He believes he was chosen to be leader of the throwing section because he “gets the players’ respect without having to push them.” And this contributes to his greatest achievement: graduating from the academy while playing two sports and being captain of the throwing team. Both Kazeem and Rasmussen will be attending Delta next year.

Senior Tyler Dole also joined the team his sophomore year because he “wanted something new to do.” During his three years of throwing he has learned that if he puts his mind to something and practices he will be good. To him, the hardest part of high school was not falling into peer pressure, but he enjoyed and will miss his friends the most. Next year, Dole will be joining the Navy because “it is a family tradition” and he wants to serve his country. He is not the only senior on throwing team going into a career after high school, Senior Cody Alexander is as well. Alexander joined the team his junior year because “it seemed fun” and his favorite part is the “friendly competition and that is such an inviting sport.” Doing the sport has made him more social and allowed him to meet new people. In his four years at West, Alexander’s most significant accomplishment was keeping his GPA up. To him, the key to success in high school is not being afraid to ask questions and get help.

To these seniors, their time in high school is almost gone, but their legacies will live on for many years to come. West and its track team will never forget the contributions and achievements of their unsung heroes.