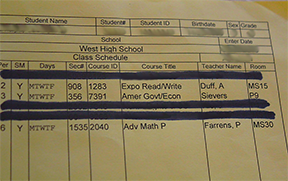 With the summer coming to an end, students return to West High for the 2016-2017 school year excited and ready for the new year. However from the first day of school, classes were noticeably overfilled or contained too few of students. Classes ranged from 40-something students to below-20 students. Because of a lack of students enrolled within certain electives, some classes were cut from the students’ curriculum.

After the first few days of school, Mr. Rio’s Human Rights class was discontinued after only obtaining twelve students to enroll for the school year. Many of these students were placed into TA positions or into other elective classes.

Senior Jocelyn Amaya said, “I wanted to [be] more well-educated on my social rights. I think that is an important thing to acquire and knowledge is power.” After Human Rights was canceled, Amaya was moved into Child Development 2. Her initial reaction to hearing the course being pulled was “sad because you could clearly see it wasn’t what Mr. Rio or any of his students wanted.”

Superintendent Dr. Brian Stephens explained, “We meet the first Friday of the year with the principal and head counselor of Kimball, West and Tracy… to go over class numbers… everybody goes through the same process.”

He further explained how none of the three high schools are similar to each other and each outcome is different for them. “Twelve kids in an elective class with thirty-eight kids in an academic class… doesn’t make very much sense.”

West High has said goodbye to Interior Design, Speech and Debate and Human Rights for now, but there is always the possibility of a course returning. Dr. Stephens explained, “Next year they could absolutely [return], wipe the slate clean…” As registration time comes again, the courses may return with the right amount of interest from students.