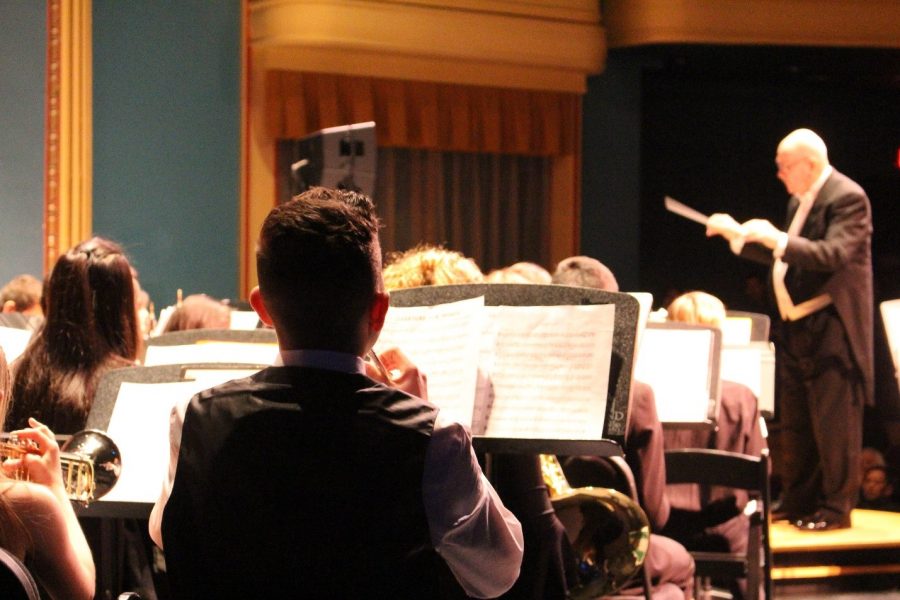 Tracy Honors is an opportunity for students from different schools and different grades to get together to practice and be able to perform in the Grand Theatre. After hours of rehearsal together and practicing by themselves, Orchestra, Choir, Jazz Band and Concert Band performed in the Grand Theatre on February 2. It was an amazing performance that showed how much everyone cares about music and how hard they worked.

The first performance was Orchestra and was conducted by Thomas Derthick. They played four songs: Libertango by Astor Piazzolla, Adagio by Tomaso Albinoni, Balletto by Ottorino Resphighi and Mambo from West Side Story by Leonard Bernstein. Everyone rehearsed a total of eight hours together and more by themselves. “It’s nice being able to play with members from other high schools as well as a guest conductor that runs an orchestra at a college,” said junior Vince Vallard who has played in the Tracy Honors Orchestra for five years, “Music is an artwork, and it’s just a really nice way to be creative and interact with other people with the same kind of mindset and interests.”

Next was Choir, which was conducted by Yejee Choi. The Choir sang five pieces called: Give Me The Splendid Sun by Eugene Butler, Ava Verum Corpus by Mozart, Shenandoah by Mark Patterson, Little David, Play On Your Harp by Rollo Dilworth and an African piece called Sansa Kroma. “I was pretty confident. I always get a little nervous, but I really love singing so I was pretty confident,” freshman Samantha Silva said.

After roughly an hour break, Jazz Band played their four songs and was conducted by Patrick Langham. They played Sweet Georgia Brown, When I Fall in Love, Then And Now and Cubauza. “Music to me is freedom of expression; it’s my chance to really sort of take these beautiful melodies and the songs and just express them in my own way but within the confines of jazz,” says Langham.

Finally, Concert Band ended the spectacular show and was conducted by John Maltester who stepped in for Dr. Eric Hammer who unexpectedly passed. They played Overture for Winds by Charles Carter, A Hymn For Band by Hugh Stuart, Adrenaline Engines by Randall D. Standridge and Military Escort by Henry Fillmore. “I feel special because I get to play with all these great musicians that are my age or around there,” says sophomore Micheal Siu.

The music was splendid, and all in all, everyone did a great job in bringing music to our ears.