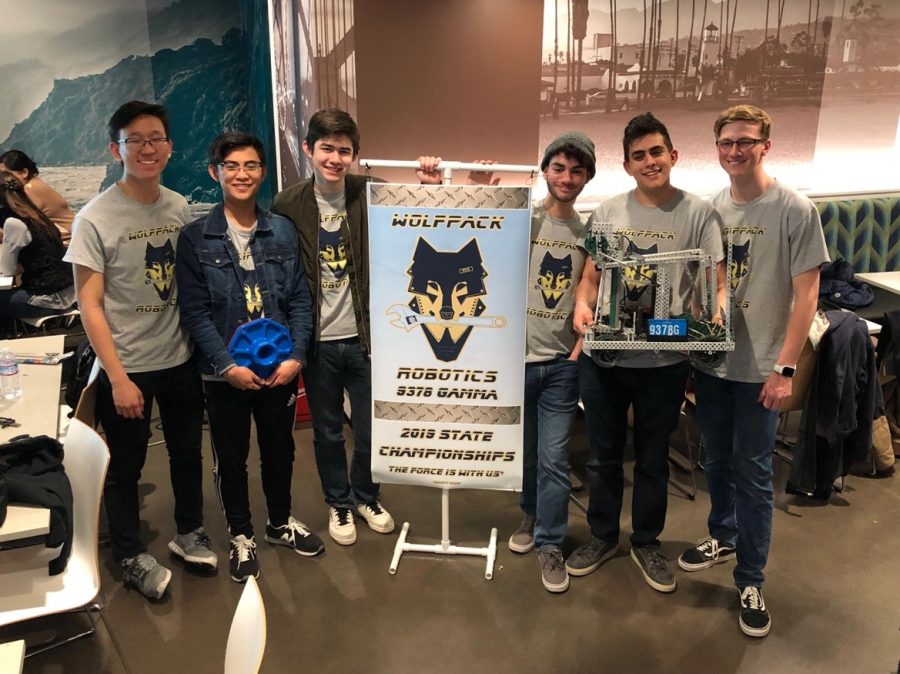 On March 2, Wolfpack Robotics competed at the 2019 California VEX VRC High School State Championship in Mountain View. Team 9378G consists of juniors Qudsi Aljabiri, Jaekob Borges, Jamey Farin, Phillip Ha, Brandon Lindner and Dalton Young, who with their robot Gamma, made it all the way to the quarterfinals in the tournament, further than any previous West High team. Competing against 30 other top-of-the line teams, Wolfpack Robotics ended up ranking 11th.

The tournament itself changes the objective of the matches with every new year/season. After qualifying matches, the alliance section begins. This time around, the objectives were to flip caps, stack caps, hit low flags and launch balls at high flags. Since this is the alliance round, two teams are paired together and compete against another two, one being red and the other being blue.  For those who don’t know, caps are round objects with one side blue and the other red, and to earn a point, you need to flip the cap so your team’s color is right side up. Aljabiri mentioned that an ideal alliance team partner would be “one who complements us by being strong in something we are weak in.” Alliance rounds can often be difficult as you may do your part, but if the team aligned with you starts to slack, it will affect your chances. Communication is key; Ha took the responsibility of being the strategist, saying that he “relayed information and informed the other team of what’s going on.” Ha also shares that doing well in solo rounds is important as it raises your ranking, allowing top teams to choose their partners or increase their chances of another good team choosing to align with you (requests can be declined).

There are various ways to qualify for state championships; Wolfpack Robotics qualified as they competed in the San Joaquin Delta VEX League where they ranked first place. The team would take monthly trips to the San Joaquin County Office of Education where they’d compete against 24 other teams in the FabLab. The FabLab came in handy as Aljabiri shares that they had places to design and build, as well as access precision cutting machines. The boys began building their robot around September and continued to improve as the months passed. The building process is mainly trial and error; 9378G used a mod kit for the programming portion of their robot and created Gamma using supplies provided by Engineering teacher and Robotics advisor Mr. Randy Moehnke.

Their strengths happened to lie in their programming with Farin coding the autonomous part so Gamma drove on its own based off the code. Ha also shares that the robot’s drivers were able to stack and flip caps at a fast speed. Although, they also have some changes they’d like to make for next year, with Aljabiri saying, “We would probably strategize better and work on time management,” as they often had tasks they wished they could’ve finished before tournaments. Ha shares that a need for time even resulted in a six-hour work day at Young’s house.

When asked to choose one ideal feature when building a robot, Aljabiri and Ha had difficulty picking just one. Ha describes a perfect robot to be one that is perfectly balanced in strength and speed, additionally one that has a lasting design so there is no need to rebuild throughout the year.

Aside from learning to build a robot, Ha and Aljabiri have built a “community” and learned various additional skills in the Robotics Club. Aljabiri has taken up the skill of compromise while Ha has experienced social and communication growth.

“Join to make new friends because you’ll definitely get much closer with the people you work with,” said Ha on why students should join. Aljabiri adds, “it’s a good community in there; they are good people who are supportive.”

Making it to state championships is no easy feat, we congratulate team 9378G for their accomplishments and wish them luck for any project they may tinker with in the future!